Hero Academy and Orcs Must Die! Unchained to shut down
Dean
8880

Unfortunately it has been announced today that online play for the original Hero Academy, Hero Academy 2 and Orcs Must Die! Unchained will be ceasing later this year, on April 8th 2019. The population of players on these games has reduced and regrettably no longer viable for Robot to provide on-going support for online play.

Orcs Must Die! 1 & 2 will continue to be available for play on Steam.

It is a challenging world for small independent developers like Robot and sometimes these tough decisions have to be made. By taking Hero Academy and Orcs Must Die! Unchained to sunset, Robot is able to focus more exclusively on TWO new exciting games which are currently in development.

Players and fans will no doubt reflect fondly on the great times they had playing these titles. Many of the community played a large part in helping to shape these games thanks to the high level of engagement Robot has with its community and its fans. We’ll remember these good times as we move into the future.

To help keep the spirit of these games going a little longer, Robot is offering active players who log in free in-game currency. Perfect if you have cards you have been wanting to unlock in Hero Academy or perhaps some heroes you have yet to try out in Orcs Must Die! Unchained. Be sure to make the most of this free in-game currency offer running until April 8th 2019.

Moving forwards Robot’s attention is firmly on the delivery of two brand new games. While there is no news to share on what these games are, be sure to stay turned for news and announcements in 2019. The bots are working hard at the factory and the studio is currently recruiting for a number of positions. We will keep you up to date, right here at REF.

It’s that time of year again to say Happy Holidays to Robot fans and players worldwide. This year has been a big year for the studio having released Orcs Must Die! Unchained on both PC and PS4 following a long ride with the community beta testing. It’s ‘Merry Riftmas’ in game right now, login and play to contribute to the Winter event to unlock sweet chests with Christmas themed goodies!

Coming up in 2018, ‘Hero Academy 2‘ is soon set to be launching worldwide which will bring mobile tactics to Android and iOS following up on the very well received original, this time the game will be in real-time and featuring tons of new cards. Something great to look forward to coming up in 2018!

See you on the other side!

Hot on the heels of the Wu Xing battles expansion pack we have a new free content expansion coming to OMDU next week – patch 2.6. This release features a brand new playable hero, meet Dobbin’s wife – Brass! 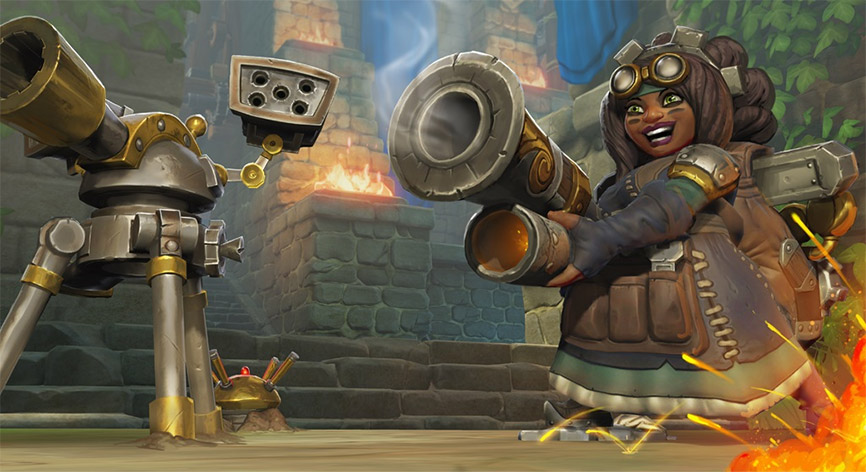 Brass is a new playable hero for the Order and is a master engineer and is equipped with an OMD2 favourite weapon, the Blunderbuss! Previously used by Max in OMD2 the blunderbuss is back and it will feel and work almost exactly like it did in the previous game. She also brings to the game some interesting new unique abilities. As Master Engineer she is able to craft a defensive Dwarven Turret to place on the map as well as placing demolition mines. Both of these can be upgraded with her weaver tiers.

For instance the turret can be upgraded from its base turret to have an electric shield and missiles depending on what weavers players choose. 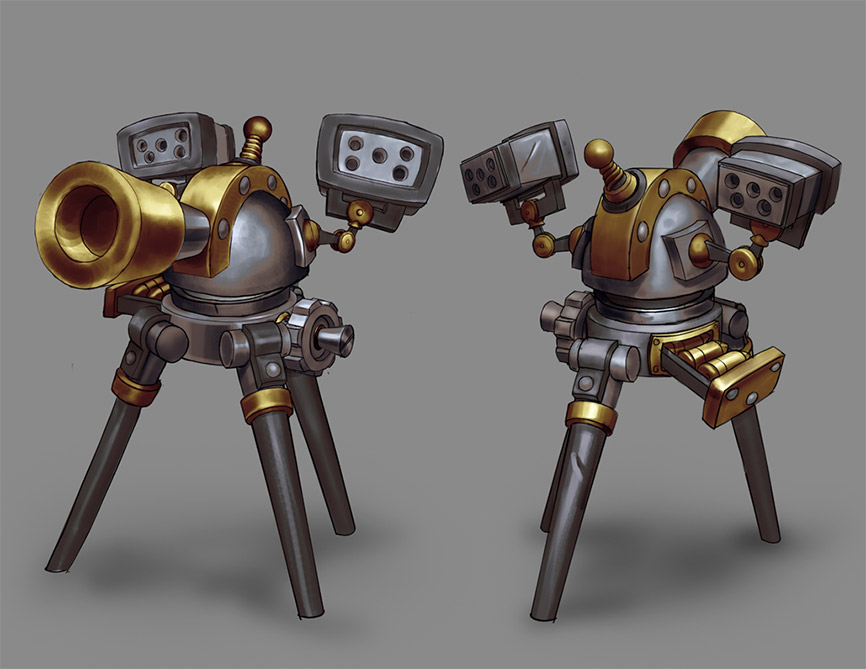 Brass is too short for large minions to see, so they will never attack her. Brass also collects scrap that drops from minions, which she needs for some abilities.

Brass shoots a shotgun-style spread shot from her Blunderbuss. The closer to your target the more damage possible. The Blunderbuss also has a powerful knockback.

Brass shoots a giant cannonball from her Blunderbuss that damages her target and explodes. The explosion also provides an area damage effect.

Brass can use this ability to repair and upgrade her turret as well as damage minions. Any wrench attack on a minion guarantees a scrap drop.

Brass can place a land mine that explodes in an area when minions are nearby. Brass Bombs cost scrap to place and she can only have 15 out at a time.

Brass places a ranged turret that attacks passing minions. She can use scrap to heal and upgrade the turret with her Swiss Army Wrench ability 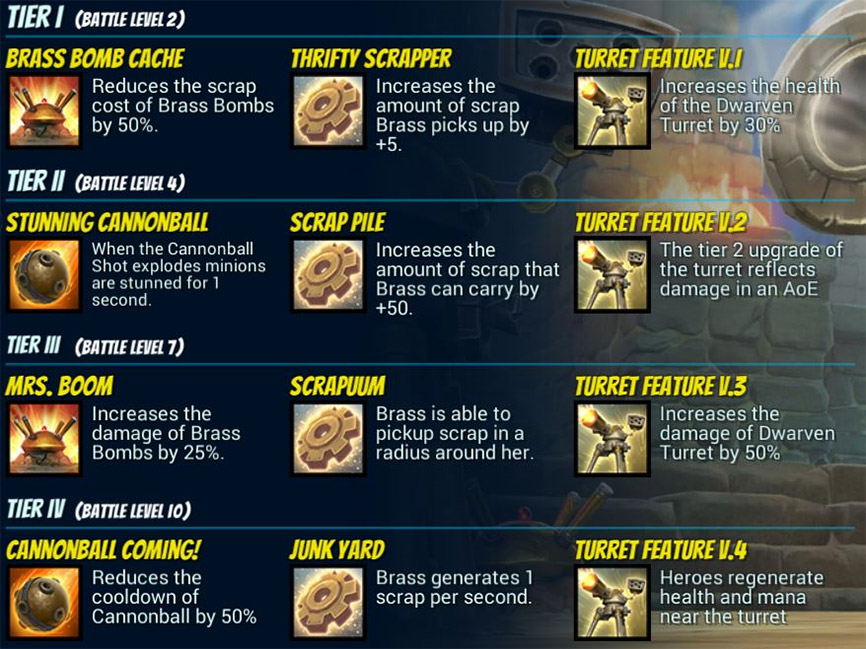 Brass is set to be a very unique hero and she will bring alot of interesting new play styles to the game with her diverse abilities. Players could choose a defensive build with the turret, or an offensive build combining scrap metal pick up, cannonball and mine upgrades.

To find out more about Brass, check out the new blog on the OMDU website – Designing Brass. The blog goes into detail about the hero design and is an excellent read.

Another great new addition in this update will be the ability for players to host and join custom games. This has been a much wished for feature from the community, especially among those who have wanted to play a certain map instead of random maps being assigned by the matchmaker. Custom games will also enable playing with friends or guild members easier. Custom games will be available for all game modes.

Due to a number of changes being made to the game in this update, and previous updates including alot of balance changes, it is time for the leader boards to be refresh for players to start fresh. The reset is for all game modes, including players Sabotage rank. This means players will need to undergo 5 placement matches again before being assigned their Sabotage rank. Players previous Sabotage rank will be taken into account when assigning the new rank.

To read about all the balance updates and other new features coming in htis patch, check out the full patch notes over on the OMDU forums!

This update is due to land 6/7th December for PS4 and PC.

The Wu Xing Battles expansion pack for Orcs Must Die! Unchained is now Live on Steam and PS4. Players can download the update and enjoy a whole bunch of free new content including three new maps (playable in all game modes), a whole new faction “Wu Xing invaders” which includes a whole set of new enemy minions and there is also a brand new hero “Yi-Lin” to round everything off.

PC players are set to receive a new patch for Orcs Must Die! Unchained next week. This patch is largely a balance patch with a couple of new features. This patch is a precursor to a bigger update happening a bit later which will add new maps and a hero to the game. For now though some of the headline changes in V2.4 are:

The rest of the patch notes relate to balance changes for all number of things. To delve into these check out the post on the OMDU forums where you can join in the discussion about the upcoming changes.

This patch is set to release August 30th.

Good news for PS4 players! Today, July 18th sees Orcs Must Die! Unchained blast onto the console! The game is free to play and available right now for download. Players with Playstation Plus will also be $20 worth of in-game currency provided free of charge in addition to some free skins.

See you in game!

It has long been announced that Orcs Must Die! Unchained is to be released on PS4, however we now have the official launch date – July 18th! The game is free to play as per the PC release and there will also be $20 worth of in-game currency provided free of charge for PlayStation Plus members, available until August 17th.

Matt DeWald, producer at Robot Entertainment is currently doing a Reddit AMA which can be found on the link below discussing and answering questions about the upcoming PS4 release. Check out the AMA below: