If you happened to watch the Super Special Live Stream event on the Orcs Must Die! EU twitch channel which took place a few weeks ago, you would have seen a special guest! Indeed, Rimmon from the OMDU EU community made a guest appearance having been invited to Gameforge HQ for 3 days by FaTeReLLa to talk OMDU with the Gameforge team.

Rimmon has been a strong influencer in the OMDU EU community. We interviewed him earlier in the year as part of our Fan Friday series where he was working with Muchcoffee on Atypical Neurons, a fan site for OMDU bursting with detailed information about heroes, traps gear and minions.

Having been invited to Gameforge HQ Rimmon has taken to the forums to blog about his experience, which had quite an interesting start with trouble with cancelled flights. It was all worth it in the end though and Rimmon got a sneak peak of what is coming up for OMDU and patch 2.6 and beyond, as well as meeting and greeting the excellent Gameforge crew who look after the OMDU EU community. Rimmon had a great time playing plenty of games with the Gameforge team on and off stream and has left with an even greater positive vibe, writing on his report:

As I left Karlsruhe I did so with renewed motivation, and fresh ideas. I hope that I’ll stay with this community as it grows, and I will of course continue trying to support, and benefit you guys in some way. I’ve been trying out Guide Writing, Fan Site, Videos, and Streaming, in the end I’ll spend my time on what I enjoy the most, be sure that whatever I do I’ll find a way to contribute to the community.

Be sure to check out Rimmon’s full report over on the OMDU EU forums using the link below. You can also check out the stream from the special event below too.

Last week Ian “Mother” Fischer and Patrick Hudson from Robot Entertainment made their way all the way over to Gamescom in Germany to show the masses Orcs Must Die! Unchained. They also took part in the official Twitch stream and as part of their interview showed off what we have to look forward to in the next patch. If you check out the stream here are some of the things you might notice.

Yep, if 15 heroes wasnt already plenty we have another hero joining the party and he goes by the name of “Tundra” who is an ice bear. A ranged hero who like Smolder can fire blasts from afar, but of course rather than fire he has an ice attack.

On the abilities front he is able to disable all traps, except ice traps, with his blizzard ability (which might also deal damage). His other ability lets him select friendly bears and highlight a player / guardian for them to target. We can expect to see more of Tundra in the next patch when full details about him will be made available.

Also new to the game is a new comeback mechanic that was actually discussed in tandem with Robot on the forums. Sort of in similar vein to Mr Moneybags, around Wave 3 mine carts will appear at each war camp and travel to the opposing rift. If the opposing team manage to kill the mine cart (currently actually a giant) they will gain a ton of extra resources split amongst themselves. The idea behind this is that a team can focus on killing the mine cart they get a big boost of resources to help turn the tide of battle. It introduces another interesting dynamic to the game. 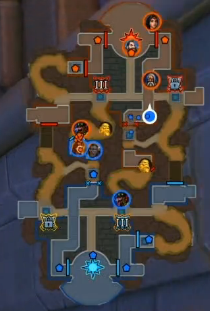 From what we can see so far from the new material shown at Gamescom we are looking at a very interesting new patch coming out later this August.

Check out the Twitch interview

Be sure to check out the full interview and gameplay demo of OMDU at Gamescom on the video below. Just skip to 06:22:00 to see Twitch sit down with the bots!

Be sure to tune in to the Orcs Must Die! Twitch channel tonight at 10PM EST (2AM GMT) to see video streaming extraordinaires Nananea and SixOkay discuss and demonstrate OMDU alpha gameplay.

Its all happening over at: http://www.twitch.tv/orcsmustdie – Don’t miss out! If you do, don’t worry it will be available to play again shortly afterwards. The previous PAX East demo stream is currently available to re-play if you missed it:

Hey Robot Fans, this is Elagatua.  I’ve been a top ranked player in the league for the past few months, and I’ve noticed the difficulty and effort required to make awesome Hero Academy content.  I’d been toying around with the idea of doing a regular twitch.tv broadcast for the last few months, so it made sense to combine these two interests.

I generally stream on Saturday evenings with shows themed around a particular squad.  I accept challenges from any viewers and commentate on my strategy during the matches.  I also put up the VODs on youtube for anyone to check out after the show has ended.

If this sounds interesting to you, please check out my stream at www.twitch.tv/tuamater or my youtube channel at www.youtube.com/tuamater